Did you mean: Born ?

Personalize your custom “Bron” project by clicking the button next to your favorite “Bron” title below...

Look up Bron in my Japanese Kanji & Chinese Character Dictionary

If you want a special phrase, word, title, name, or proverb, feel free to contact me, and I will translate your custom calligraphy idea for you.

布朗森 is the name Bronson in Chinese (Mandarin).

ブロンソン is the name Bronson in Japanese Katakana.

A husband and wife separated and reunited.

About 1500 years ago in China, there lived a beautiful princess named Le Chang. She and her husband Xu De Yan loved each other very much. But when the army of the Sui Dynasty was about to attack their kingdom, disposed of all of their worldly possessions and prepared to flee into exile.

They knew that in the chaos, they might lose track of each other, so the one possession they kept was a bronze mirror which is a symbol of unity for a husband and wife. They broke the mirror into two pieces, and each of them kept half of the mirror. They decided that if separated, they would try to meet in the fair during the 15th day of the first lunar month (which is the lantern festival). Unfortunately, the occupation was brutal, and the princess was forced to become the mistress of the new commissioner of the territory, Yang Su.

At the Lantern Festival the next year, the husband came to the fair to search for his wife. He carried with him, his half of the mirror. As he walked through the fair, he saw the other half of the mirror for sale at a junk market by a servant of the commissioner. The husband recognized his wife's half of the mirror immediately, and tears rolled down his face as he was told by the servant about the bitter and loveless life that the princess had endured.

As his tears dripped onto the mirror, the husband scratched a poem into his wife's half of the mirror:

You left me with the severed mirror,
The mirror has returned but absent are you,
As I gaze in the mirror I seek your face,
I see the moon but as for you, I see not a trace.

The servant brought the inscribed half of the mirror back to the princess. For many days, the princess could not stop crying when she found that her husband was alive and still loved her.

Commissioner Yang Su, becoming aware of this saga realized that he could never obtain the love of the princess. He sent for the husband and allowed them to reunite.

This proverb, 破鏡重圓, is now used to describe a couple who has been torn apart for some reason (usually divorce) but have come back together (or remarried).
It seems to be more common these days in America for divorced couples to reconcile and get married to each other again. This would be a great gift if you know someone who is about to remarry their ex. 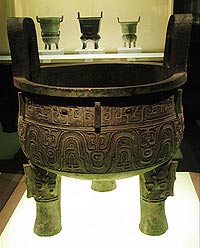 4 people have searched for Bron in Chinese or Japanese in the past year.
Bron was last searched for by someone else on Oct 10th, 2021