• Delivered to you in Ashburn by Jan 31st.
• Standard shipping is just $3.80 for any order.
• Hand-Painted Artwork - Each one is unique.
• Handmade Wall Scroll.
• Money-Back Guarantee. 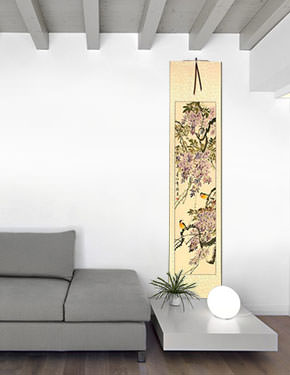 This artwork features two birds alighting on branches that are filled with purple and lavender flowers with hints of pink.

The title is 紫雲飄香 (Zǐ yún piāo xiāng) which literally means "Purple cloud in-the-wind fragrance" but I would more naturally translated it to English as, "Purple cloud, fragrant wind."

紫雲 or "purple clouds" by itself can refer to clouds on which Amida Buddha rides to welcome spirits to Nirvana. 飄香 is a word that often refers to a fragrance that to wafts about.