• Delivered to you in Ashburn by Jan 22nd.
• Standard shipping is just $3.80 for any order.
• Sadly, this great artist passed away. This is his last calligrpahy piece like this.
• Hand-Painted Artwork.
• Handmade Wall Scroll.
• Money-Back Guarantee. 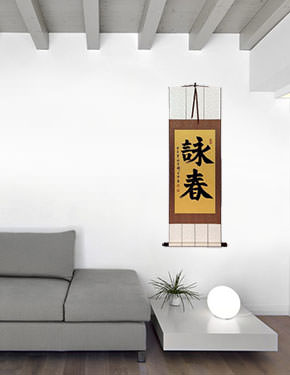 This martial arts technique has an oral history (versus a written one) so very little can be said for sure about its origins. Wing Chun (or Wing Cheun) is a Chinese martial art that emphasizes short combat strokes.

The characters literally mean "Singing Spring" (Spring as in springtime).

If you are wondering, the spelling and pronunciation of this martial arts style in English comes from the Cantonese pronunciation of these characters. The second character sounds similar in both Mandarin and Cantonese, but the first is quite different. The official romanization from Mandarin is "yong3 chun1" or "yǒng chūn". This can also be romanized from Cantonese as "wing2 cheun1". The numbers after the letters indicate which tone to use when pronouncing each sound.