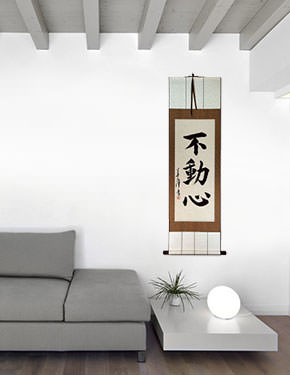 Together, these three Kanji create a title that is defined as "immovable mind" within the context of Japanese martial arts. However, in Chinese it would mean "motionless heart" and in Korean Hanja, "wafting heart" or "floating heart".

This is one of the five spirits of the warrior (budo), and is often used as a Japanese martial arts tenet. Under that context, places such as the Budo Dojo define it this way: An unshakable mind and an immovable spirit is the state of fudoshin. It is courage and stability displayed both mentally and physically. Rather than indicating a rigid inflexibility, fudoshin describes a condition that is not easily upset by internal thoughts or external forces. It is capable of receiving a strong attack while retaining composure and balance. It receives and yields lightly, grounds to the earth, and reflects aggression back to the source.