A list of countries that we deliver to can be found here: Asian Art Delivery Countries.
Locked
2 posts • Page 1 of 1

We don't want to, but prices are going to have to increase soon.

Reasons:This really affects us, as we buy artwork, and pay wages in RMB, but sell the artwork in USD. The result is we pay more, and make less.

This means several things: Here is a chart of the Chinese RMB against the U.S. Dollar for the last few years (notice the curve - this means, the rate at which things are getting worse, is getting worse). 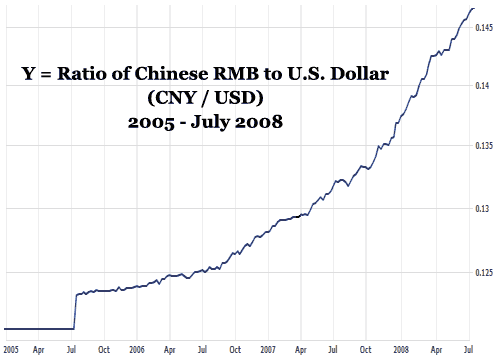 In simple terms, the graph shows how our costs have increased since mid-2005.
In technical terms, it's an exponential increase in costs, with no end in sight.

I have just returned from an art-buying adventure, covering about 3000 miles within China to visit many of my artist-friends, and buy a lot of new artwork (about 1200 pieces). I am now in the process of slowly adjusting the prices on many items. I probably should have done this two years ago, but I just hate to increase prices. As of today, I am not even half-way done. So if you see a good deal, take it now - tomorrow, the price could be 5-20% higher.
Last edited by Gary on Dec 12, 2010 10:41 am, edited 3 times in total.
Top

Backing off the price increases...

Well, I've backed off a bit. We still want to make artwork as affordable as possible.

So, I've only adjusted prices on items that we were either breaking-even, or losing money on.

We partially pulled my two-year-old daughter out of daycare (2 days instead of 5), and have tightened our household budget in other ways. Hopefully we can weather this bad economic storm, and make the proper and fair adjustments later.

The fact that many websites are selling similar artwork for $275-$800 that I sell for $98-$248 should be enough to prove our sincerity.

Of course, it's hard for them to compete when we build our own, exhibition-quality, handmade silk wall scrolls, and all the artwork comes directly from the studios and homes of my artist-friends around China.

And, we're NOT going to reduce our quality to the "tourist-trash wall scrolls" level that they often sell on eBay, just to increase our profit margin.

If we go down, we'll go down knowing that we've offered the best artwork and wall scroll mounting for a more-than-fair price.